South Koreans flock to crypto amid a heavy-handed regulation approach

CBOE files another Bitcoin ETF application with the SEC

The price of Bitcoin (BTC) tested $10,000 a total of five times in the past 11 days. The price action can be considered as a bullish or a bearish trend based on varying perspectives. The quintuple test of a key psychological level at $10,000 can be analyzed in two ways: The $10,000 resistance level is getting weakened with every test, or the resistance is so strong that buyers are not able to break out of it.

The short-term, bullish scenario for Bitcoin

Traders who expect the price of Bitcoin to reclaim the $10,000 resistance level as support and see a rally to key levels above it predict that the resistance area was weakened with multiple spikes to the $9,800-to-$9,900 range.

Traders continue to debate whether the current price trend of Bitcoin the start of a bullish uptrend following the highly anticipated block reward halving on May 11. Fundamentally, the block reward halving is a highly optimistic event for Bitcoin’s price because it directly affects the supply of BTC, as it halves the amount of Bitcoin mined, decreasing the rate, at which new BTC is produced and, subsequently, how much is sold on the market.

Historically, the halvings of 2012 and 2016 both resulted in at least a 2,500% increase in price. Hence, the bullish trajectory of BTC is that the halving will push the price of Bitcoin forward in both the short-term and the long-term.

According to cryptocurrency researcher Philip Swift, an indicator called the 2-Year Moving Average Multiplier shows BTC reached its bottom at $3,600 and broke out of a multi-year trendline at $5,800. At a macro level and in a more long-term scenario, Swift noted that the indicator suggests the next reasonable target for BTC is the all-time high of $20,000. Swift tweeted:

“$BTC has been super bullish since it broke out above the 2yr MA. We got our chance to accumulate below it b4 the hedge fund guys got all excited about Bitcoin. Next stop now the 2yrMA x5 [over $20,000].” 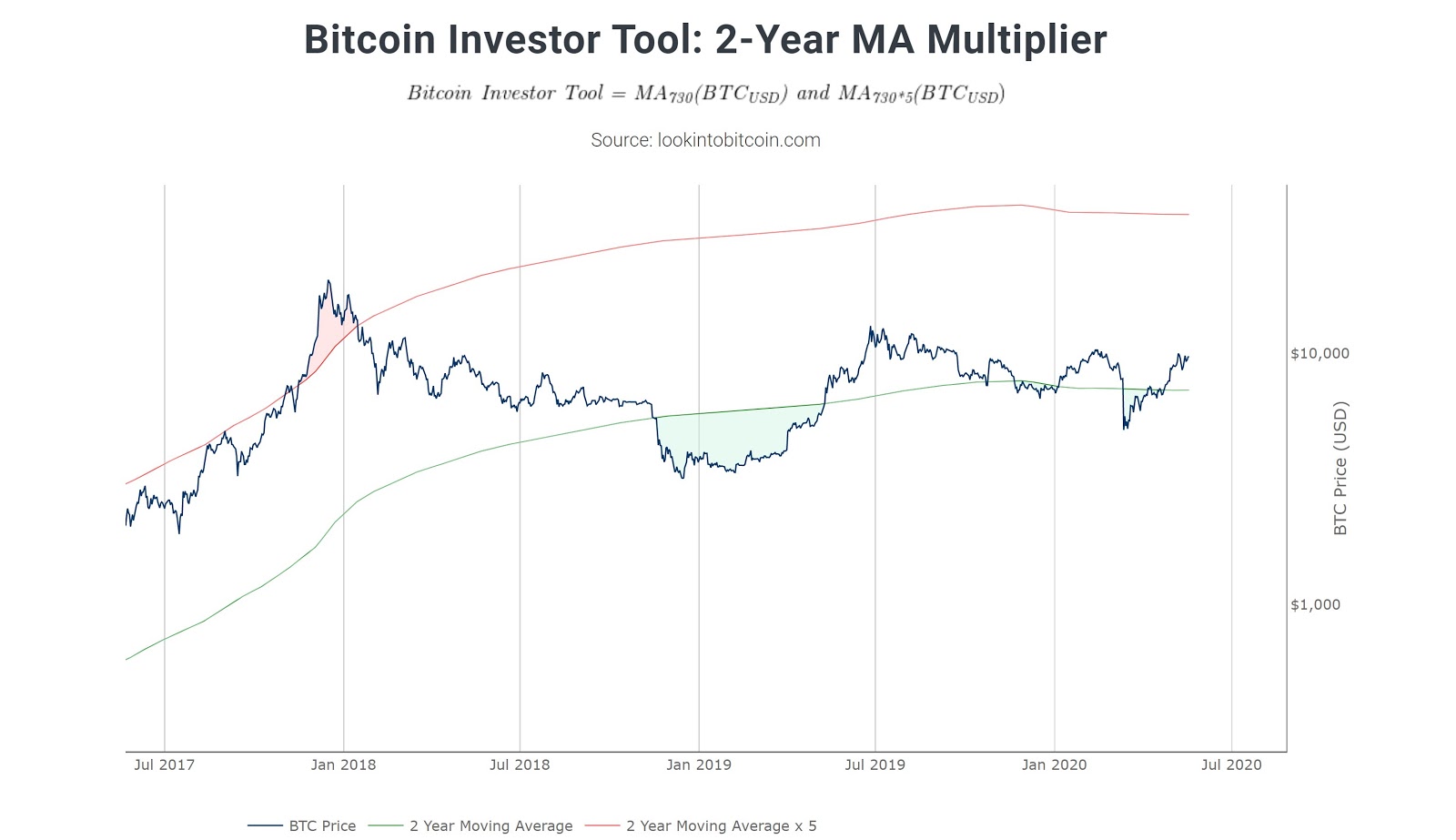 Similarly, Bitcoin trader Nunya Bizniz said Bitcoin is showing a “golden cross” at a high time frame, which has only happened seven times in Bitcoin’s history. The last golden cross was triggered when BTC was hovering at around $5,000 in early 2019 when it recovered from a plunge to $3,150. Bizniz tweeted:

“BTC Golden Cross (GC): GC = 50dma moves above 200dma. There have been 6 occurrences. Of those, only one has occurred while the 200MA is rising. A 7th GC is about to occur with a slight rising gradient in the 200MA.”

A golden cross typically indicates the start of an extended bull trend. However, the risk is that BTC’s price could potentially drop below this cross point when it happens, which then makes it a death cross with a bearish structure. 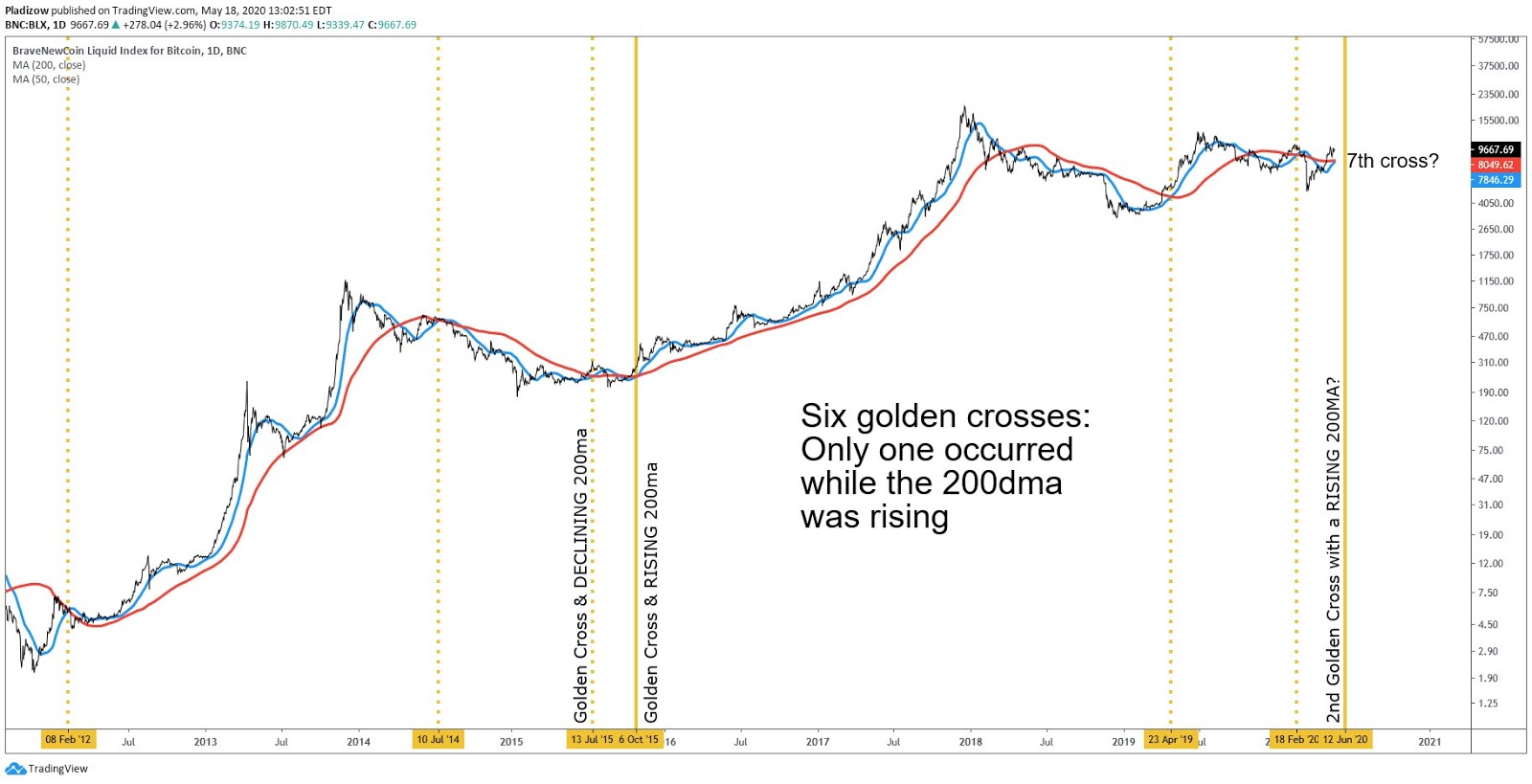 The seventh golden cross in the history of Bitcoin forms. Source: Nunya Bizniz

For most of the macro bullish trends of Bitcoin to remain intact, BTC has to remain above $9,000 over the next week and continue to retest the $10,000 resistance level. The positive sentiment among professional traders also coincides with the moving average convergence divergence, or MACD, indicating an additional upside on a weekly Bitcoin price chart.

With Bitcoin remaining above $9,000, cryptocurrency investor known as “Light” emphasized that the sentiment around Bitcoin among top traders is generally positive, tweeting:

“I am yet to run into a single competent trader/investor who is bearish on Bitcoin in this current moment. And those who are long are bullish with conviction. In hindsight it’ll either look incredibly obvious, or it’ll turn out that we’ve all run grossly ahead of ourselves.”

However, when the majority of the market is bullish, it often leaves BTC vulnerable to a correction before another uptrend. That is the risk of a deep pullback other highly regarded traders see in the near-term.

The bearish Scenario for Bitcoin over the next few weeks

The tendency of Bitcoin to fall after a halving combined with the failure to break out of the $10,000 resistance level following five unsuccessful attempts has fuelled most bearish predictions for BTC. Bitcoin trader known as TraderXO said in a tweet that BTC’s price is likely to drop to the low-$9,000s in the near-term, with the mid-$8,000 region as a lower area of support.

Bitcoin price range based on its price action since early May. Source: TraderXO

Based on market data, approximately 72% of the Bitcoin futures market is taking a long position. That means the overwhelming majority of traders are expecting Bitcoin’s price to go up. While this is typically a positive piece of data, it also opens up the possibility of a long squeeze.

Across BitMEX, Bitfinex and Binance Futures, there is about $716 million worth of active longs. In contrast, only $273 million worth of shorts is filed. The large discrepancy between longs and shorts decreases the probability of a short squeeze and increases the likelihood of a deep pullback.

Variables outside of price action

The fundamentals of Bitcoin such as on-chain activity, liquidity and sentiment slightly declined after the halving. Liesl Eichholz, the head of growth strategy at Glassnode, wrote:

“Bitcoin on-chain fundamentals dropped slightly in Week 20. GNI registered a 1 point decrease over the week, pushing its overall assessment of the Bitcoin ecosystem to 73 points. This downturn was mainly driven by the Network Health subindex, which decreased by 8 points.”

The minor decrease in overall liquidity and sentiment was mainly caused by a decline in interest toward Bitcoin pre- and post-halving. Before the event, the number of transactions on the Bitcoin blockchain network and activity across various platforms increased.

Considering the pre-halving hype, Eichholz emphasized that the slight drop in fundamentals is not necessarily a negative indicator. A positive factor, however, is an increase in the number of addresses holding more than 0.1 BTC, or around $970.

Related: Bitcoin Halving Was Not the Apocalyptic Event Some in Crypto Feared

Bitcoin has the image of a currency that is widely owned by whales — i.e., individual investors who hold a large portion of the asset’s supply. However, data shows that the distribution of the supply of BTC has improved, with more people owning BTC. Rafael Schultze-Kraft, a researcher at Glassnode, tweeted:

“There are now more than 3 million #Bitcoin addresses holding at least 0.1 $BTC (current value: $975 USD). That’s 14% more addresses than one year ago today.”

External factors such as on-chain data and fundamentals show that there are no major events that could have a significant impact on BTC’s price in the short-term. That leaves the current price action of BTC along with macro trend projections as the two factors that are likely to sway BTC’s price in the coming weeks.

For bears or sellers, Bitcoin’s price dropping below $9,000 to avoid a golden cross at the mid-$9,000 region and an optimistic breakout on the weekly chart would indicate the resumption of a bearish trend.

For bulls or buyers, Bitcoin’s price remaining above the $9,500-to-$9,600 range would indicate that despite strong overhead resistance, there is enough demand across spot, futures, options and institutional markets to sustain the uptrend of BTC.

Egg Producer’s Data Poached by Ransomware, Will They Shell Out Bitcoin?