Crypto is the most dangerous investment, Bank of Russia governor says

Bitcoin is ‘own worst enemy' and will lose to Ethereum: Charles Hoskinson

Coming every Sunday, Hodler’s Digest will help you track every single important news story that happened this week. The best (and worst) quotes, adoption and regulation highlights, leading coins, predictions and much more — a week on Cointelegraph in one link.

Once again this week, BTC suddenly soared into five figures — hitting $10,380 soon after Donald Trump mobilized police and the National Guard to disperse protests outside the White House. The surge helped break a long-term descending trendline of $10,250 that had been in place since Bitcoin hit all-time highs in December 2017. Unfortunately, it wasn’t to last — and once again, the multiyear resistance of $10,500 was too much for BTC to handle, with the world’s biggest cryptocurrency plummeting by 14% in less than 15 minutes. Analysts, such as Michaël van de Poppe, believe bearish sentiment isn’t warranted right now, as an upward structure that has been in force since March 12 remains intact. Meanwhile, Keith Wareing believes these constant tests of $10,000 are becoming all too predictable — and thinks an eventual breakout could be much higher, catching everyone off guard. He wrote: “The bullish scenario of extending towards the first key resistance of $10,500 looks likely in the short term. Finally breaking out from this level would put $12,000 firmly within reach before experiencing heavy overhead resistance at $13,900.”

Bloomberg: “Bitcoin will approach record high of $20,000 this year”

June’s crypto outlook from Bloomberg was great news for Bitcoin — but less so for Ether. According to its analysts, “something needs to go really wrong for BTC to not appreciate.” At present, the world’s biggest cryptocurrency is mirroring the 2016 run to its all-time high — and if history were to repeat itself, Bloomberg says a return to $20,000 could happen this year. The report even suggests $28,000 may be possible, writing: “Last year, the high was about $14,000, which would translate into almost double in 2020 if rotating within the recent band.” Bloomberg also warned that Ether’s time as the second biggest crypto by market cap might soon be coming to an end. According to its analysis, it’s only a “matter of time” before the Tether stablecoin takes the No. 2 spot. One withering line read: “We see little upside in the ETH price absent a rising tide from Bitcoin.”

Coinbase repeats pattern of shutting down when Bitcoin gets volatile

“Temporarily unavailable” is a phrase that’s become all too familiar for users of Coinbase. The exchange has gone offline four times in the last three months during major BTC price moves — and those who rely on the service are furious. Some are even claiming that the outages may be deliberate, with one Twitter user speculating that Coinbase has a built-in algorithm to automatically shut it down anytime there is a BTC price movement over $500. Crypto Capital Venture’s Dan Gambardello asked: “How does an exchange with an $8 billion valuation crash every time Bitcoin pumps 5%?” There’s not been much in the way of an official statement from Coinbase’s CEO, Brian Armstrong. Does the exchange realize that its reputation is taking a beating, and will it do anything to salvage it?

CipherTrace says 2020 is on track to become a record-breaking year for cryptocurrency-related thefts, hacks and fraud. From January to May, the value of ill-gotten funds siphoned through cryptocurrency crimes has reached almost $1.4 billion. It’s possible that the amount lost to bad actors will outstrip the $4.5 billion recorded in 2019. As you’d expect, criminals have been capitalizing on the coronavirus crisis in recent months — rolling out a range of new crypto-related phishing campaigns, ransomware and darknet marketplace fraud. And in case you were wondering if these scammers have any scruples, it appears not: Evidence suggests they have mimicked the World Health Organization and the Red Cross in an attempt to achieve credibility.

The U.K.-based crypto trading platform Revolut has confirmed that it has dismissed dozens of people — blaming the cuts on the impact of the coronavirus. It followed a rather grim story by Wired, in which some workers claimed they were given a choice: be fired because of poor performance, or sign terms saying they departed of their own accord and receive a slight payout. “Some of the employees allegedly pressured to leave have been left stranded in a foreign country without a job or health insurance in the middle of a pandemic,” Emiliano Mellino’s report revealed. In response, Revolut said it strives to create a positive culture for its workforce — adding that it tries to make it as “painless as possible” for employees to leave its business. 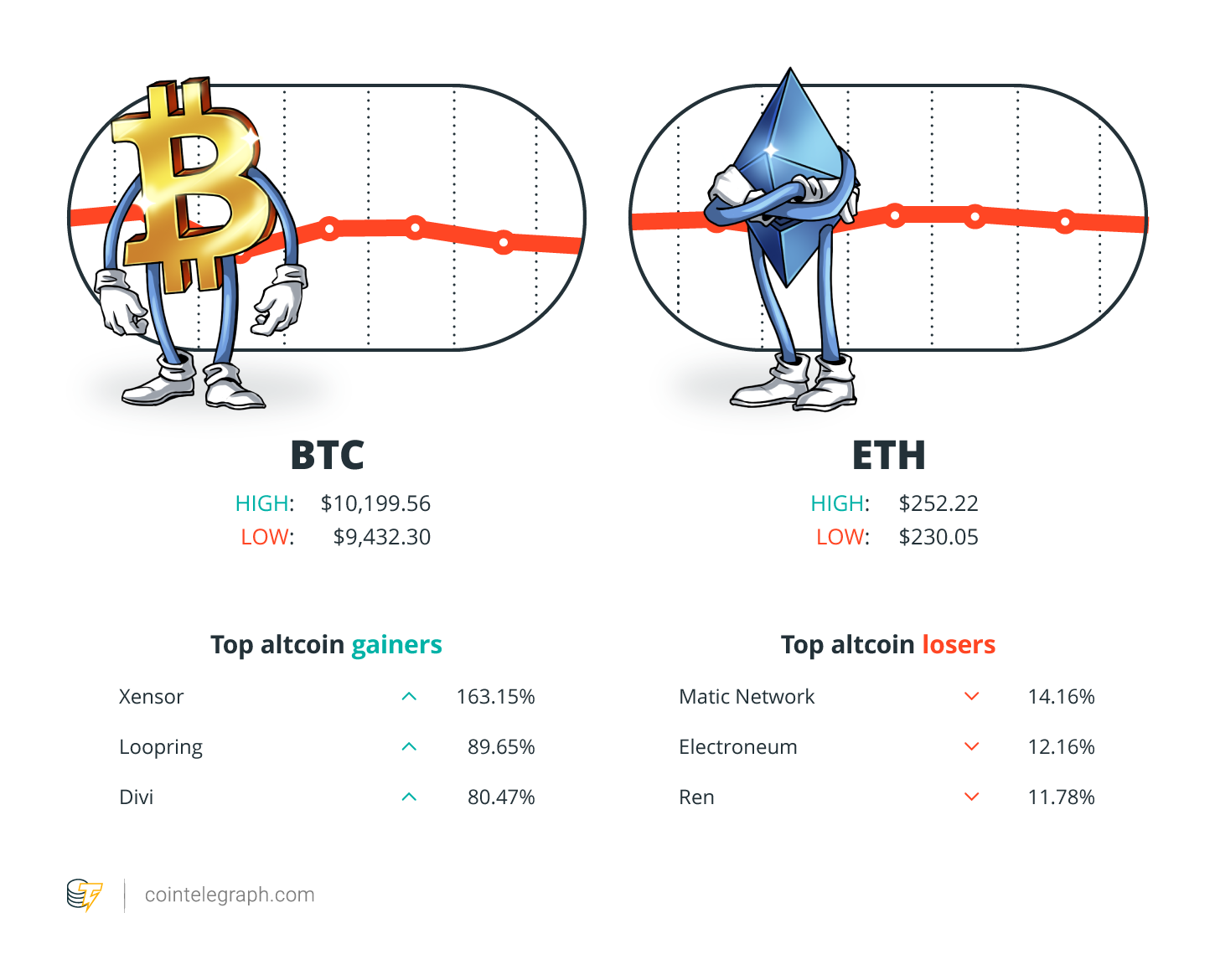 For more info on crypto prices, make sure to read Cointelegraph’s market analysis.

“Absent an unlikely reversal in predominant crypto trends, it should be a matter of time until Tether passes Ethereum to take the No. 2 spot in total assets behind Bitcoin.”

“We see little upside in the ETH price absent a rising tide from Bitcoin. The pre-eminent crypto is breaking away from the pack in terms of adoption and is supported by almost-ideal macroeconomic conditions for stores-of-value amid quantitative easing.”

“Alert Issued: We have received reports that billions of XBG were minted despite having a max supply of 21M.”

Prediction of the Week

Coin Metrics has predicted that Bitcoin’s daily trading volumes could eclipse the U.S. equity market in a few short years. At present, BTC has a daily spot market volume of $4.1 billion in USD markets — a stark contrast to the $446 billion value of the U.S. equity market. It seems like an exceedingly tall order, but Coin Metrics believes this is achievable by the middle of the decade. “If historical growth rates can be maintained, however, Bitcoin’s current daily volume from spot markets of $4.3 billion would need fewer than four years of growth to exceed daily volume of all U.S. equities,” its report said. “Fewer than five years of growth are needed to exceed daily volume of all U.S. bonds.” 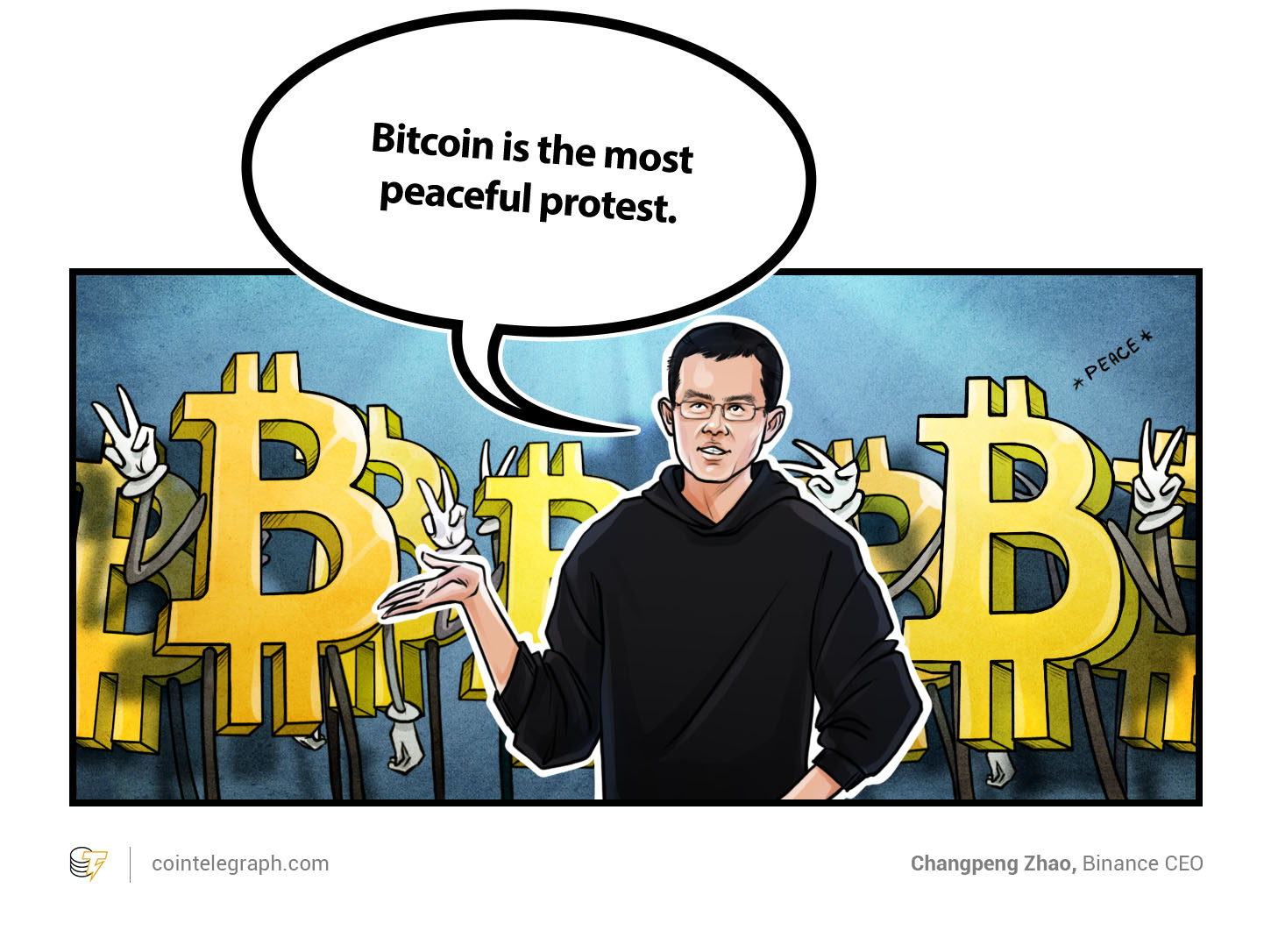 FUD of the Week

The amount of money demanded by ransomware attackers rose 200% in 2019, according to a new report by Crypsis Group. According to the digital forensic firms, victims are now being told to pay a median of $115,123 in order to unlock access to their information. It seems cybercriminals are now becoming increasingly selective over how they target and focus on victims who would be capable of paying “exorbitant” ransoms. Their tactics are also evolving — allowing them to sidestep the defense strategies often adopted by businesses and consumers. Just this week, it was revealed that three U.S.-based universities have been struck by the NetWalker ransomware group. Meanwhile, new data suggested that Singapore suffered a 300% rise in cryptojacking attacks in the first quarter of 2020. 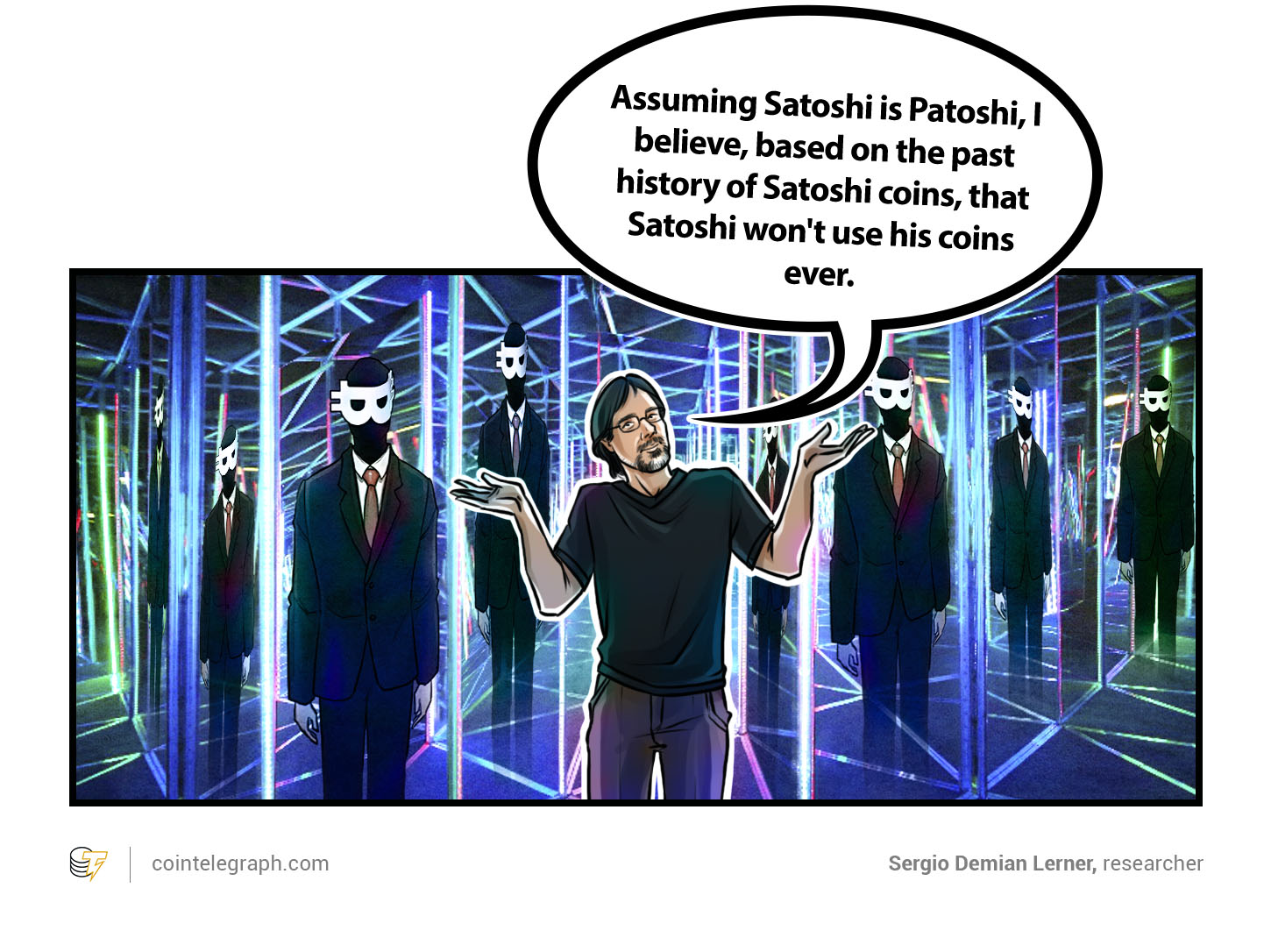 The BitGrin network appears to have minted billions of XBG tokens — despite a declared maximum supply of 21 million. CoinMarketCap has added a warning to the page it maintains on BitGrin and alerted users to the anomaly on Twitter. BitGrin’s lead developer, Pharazen, told Cointelegraph that exactly 5 billion XBG were issued as a reward for a single block on the blockchain, causing the total supply of the cryptocurrency to reach 5,021,000,000 XBG. Although he claims he rendered the coins inaccessible by transferring them to an address that he himself cannot access, he admitted this cannot be proved.

A California-based psychologist is suing a buyer who attempted to pay for 30% of her property’s value in the form of a “worthless” crypto asset called Troptions.gold. Mary Shea says the dispute has left her unable to sell the home because Mike Cherwenka’s company still claims an interest in it. Cherwenka and his firm, Best Buy Homes, are accused of violating securities and state racketeering laws by misleading her about the nature of the Troption digital currency. According to her complaint, “confusing and false statements” were entered into the real estate contract. “Every day that Best Buy wrongfully claims an interest in her property, Shea cannot find a buyer who will pay legal tender,” the suit says.

Decentralized technologies can help to avoid jeopardizing citizens’ private data in the name of public health during the global pandemics, writes Muneeb Ali.

Experts believe that a more holistic crypto ecosystem, especially one that is more AML-centric, is needed to help prevent the spread of crypto scams in 2020. Shiraz Jagati has more.

Blockchain to disrupt music industry and make it change tune

António Madeira explores how blockchain technology is tipping the scales of the music industry, shifting the power from intermediaries back to artists.